What Happened to Low Speed Chase?

After the Farrallones race tragedy of 2012, The San Francisco sailing community, and the sailing community at large, were left awestruck and humbled, looking for answers and mourning with the families of the 5 who were lost. When it came time to pull Low Speed Chase from the rocks of the Farrallone Islands and bring her home, authorities needed a boat transport company they could trust. Someone with experience, integrity and who would respect the sensitive nature of the project. They called San Diego Boat Movers. As the premier boat transport company in California, and with over four decades of experience, they knew they could trust SDBM to be discreet, professional and flexible.

Low Speed Chase was hooked up to lifting straps and flown by helicopter from the southeast Farrallone island. A special private landing area had been established at Pillar Point Airport near Half Moon Bay, where the media and public could be kept at a distance, allowing authorities, the owner/captain, and the families to both further inspect the vessel and have some private time to mourn and reflect. It was a very moving time for us as well, but SDBM staff chose to keep our distance, providing perimeter security instead, and only approached the vessel when it was finally time.

Finally Low Speed Chase was craned onto one of our trailers and secured in place, and transported to an undisclosed facility in the San Francisco Bay area for further investigation. It was a sad day, but also an honor to be chosen to participate in this important event. The entire SDBM crew extends our heartfelt condolences to the families of those lost in Low Speed Chase Farrallones Race tragedy, and hope that lessons learned will prevent any similar event in the future. 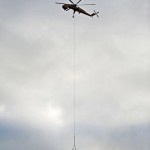 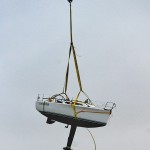 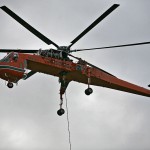 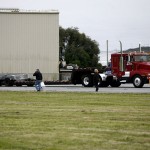 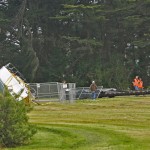 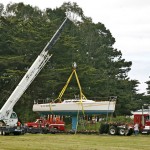 We would absolutely recommend San Diego Boat Movers, for moving your boat or anything else oversize. They are top notch professionals and just a pleasure. We will certainly be asking for their moving talents again when the Formosa 41 is once again ready for the adventures of the sea.